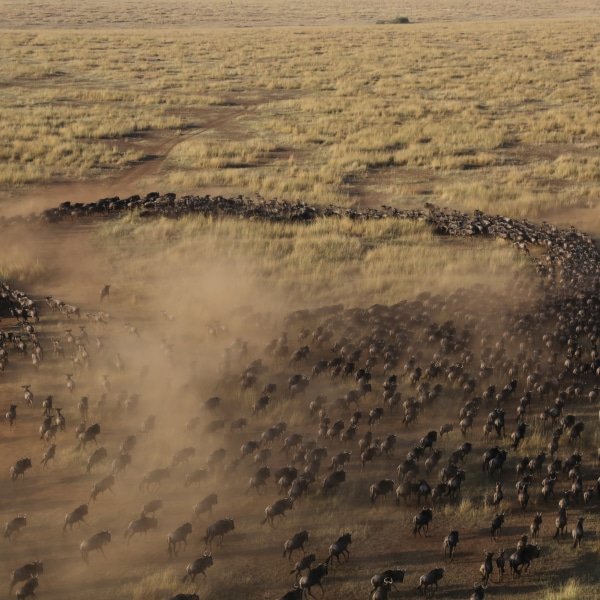 The world has its fair share of migrations. There’s the flamingo migration between Tanzania’s many alkaline lakes, the zebra migration in Botswana’s Linyati and Savute areas, the colonies of fruit bats in Zambia’s Kasanka National Park and the humpback whales, which undertake the longest mammal migration on earth. But the most famous and most photographed wildlife spectacle by far is the annual Great Wildebeest Migration that boasts the largest mass movements of mammals anywhere on the planet. Taking place in Tanzania’s Serengeti and Kenya’s Masai Mara, it features over 1.5 million wildebeest (or gnus), 500 000 zebras and massive herds of Thompson’s gazelles, antelopes, elands and impalas. Theirs is a never-ending trek.

This Great Migration is in reality one phase in a continual cycle of nomadic pasture-seeking, mating, calving and more pasture-seeking, that sees the majority of the herds ever on the move, according to the onset of the seasonal rains, the rise and fall of the river waters and the growth of the rich oat grass and other pastures. So it’s just a matter of deciding when you wish to travel and what your particular interests are, before booking your trip. Calving season takes place between January and March in Tanzania’s Serengeti and Ngorongoro Conservation area, bringing forth a record 500 000 new calves. Within 10 minutes of birth, wildebeest calves are on their feet, so that they’re ready to move when the herd decides to head out. The animals graze en masse and as the food supply diminishes, the herds are forced to head to the long grass plains and woodlands of the Serengeti’s western corridor and eventually on to the Masai Mara in Kenya. Wildebeest have no leader and as a result, herds will often split into smaller groups that fork off and wander in different directions.

The chosen crossing place is usually shallow enough to allow the majority of the herd to cross safely. However, most of the river is deep and fast-flowing, with steep banks on either side. Many of the weaker animals are swept away by the strong river current or are trampled by the stampede of the other wildebeest as they swim. Hundreds of animals die during the river crossings. The Mara’s huge Nile crocodiles gorge themselves during this period, snatching flankers from the edge of the main column. Sometimes dozens of dead wildebeest are washed up on the banks, where a macabre posse of vultures, marabou storks, heynas and crocodiles picks over the spoils.

In November, the short rains call the migration southward, back to the Serengeti. During this nearly 3 000 km (1800 mile) journey, about 500 000 wildebeest die due to predator attacks, exhaustion, starvation and sickness.

Adventure lovers may be keen to follow close on the heels of the migration by staying in a mobile tented camp which ensures that you’ll always be in the best place at the best time. And of course, permanent accommodation options are also readily available with daily game drives to see the migratory herds in action. Don’t miss the chance to experience viewing this ‘the greatest wildlife show on earth’ from above in a hot air balloon.

TO EXPERIENCE THIS NATURAL WONDER FOR YOURSELF, GET IN TOUCH WITH IKEWANA TODAY!