If I had to root for one team only, time and time again, my choice would most certainly be for newly hatched marine turtles in their race to survive. Watching them emerge from their nest and make their perilous dash to reach the ocean – in the face of scores of hungry predators on land and sea – fills me with equal quantities of hope and dread.

Still, witnessing this as well as the nesting of adult marine turtles is reserved for the lucky few and one of the highlights attracting visitors to Mozambique. The country’s pristine and unspoilt coastline offers you the chance of encountering any of the five species of marine turtles reported to nest on Africa’s beaches: the green (Chelonia mydas), the olive ridley (Lepidochelys olivacea), the loggerhead (Caretta caretta), the hawksbill (Eretmochelys imbricata) and the leatherback (Dermochelys coriacea). Benguerra is one of the few islands off Africa where all 5 turtle species nest. Mozambique’s northern coastal section provides important nesting and feeding habitats for green, hawksbill and sometimes olive ridley turtles, while the southern section provides important nesting habitat for loggerhead and leatherback turtles.

Human activities have had a large impact on sea turtles and the world’s marine species and at this point, protective measures are no longer optional, but an absolute necessity. The Leatherback and Hawksbill turtles are currently critically endangered. In Mozambique, all turtle species are protected by law and the killing of marine turtles and possession of their eggs is a punishable offence.

The marine turtle life-cycle begins after a period of mating in the shallow coastal waters. Nesting occurs at night in summer when the adult females come to shore and in general excavate their nests high above the watermark. She lays around 300 eggs, then covers the eggs with sand, kneading and pressing the surface until it is packed hard. Once done, she disguises the nest by vigorously throwing sand over the nest with her fore-flippers, before returning to the sea, exhausted. Interestingly, these are often the same beaches where the turtles would have hatched many years, if not decades, previously. Typically the females lay 2-3 batches of eggs in a nesting season and pass several weeks in shallow inter-nesting areas. Should you get to watch this unforgettable experience, it is important not to disturb the turtles that enter a trancelike state while laying their eggs and to avoid using bright lights and making a noise.

Between 55 and 65 days pass before hatching can take place. Using an egg tooth on the end of their beaks, hatchlings cut their way out of the eggs. Should the hatchlings reach the surface during the heat of the day, they are automatically inhibited from further movement by the heat of the surface sand and will wait until the temperature drops before bursting out and running for the sea. Eggs incubated above about 30⁰C tend to develop into females, while those incubated below 28⁰C develop into males. This is an interesting consideration in the face of global warming: the prospect of skewed sex ratios and the resulting high levels of female turtles which will result in marine turtle populations becoming unstable.

THE SCRAMBLE TO THE SEA

Heading for the exact centre of the light zone – which is almost always found over the sea’s horizon, the defenceless hatchlings scramble their way to sea. Although surprisingly strong and fiercely determined, the hatchlings face a 90% hatching rate, an estimated 75% survival rate on their trek to the sea and only a 1% chance of making it to adulthood. It comes as no surprise then, that the females produce such a high number of eggs.

Predators include ghost crabs, foxes and birds, and in the shallow waters, many are eaten by fish and reef sharks. Due to the lengthy maturation period coupled with the many natural dangers encountered along the way, it comes as no surprise that as few as 1 in 1,000 eggs survive to adult turtles. And even then, turtles face obstacles like illegal trade, direct consumption, hunting (for their meat, eggs, carapaces and leather), by-catch from trawlers, longlines and gill nets, and habitat destruction due to coastal tourism.

The baby sea turtles that do reach the sea, will participate in a swimming frenzy to reach open ocean zones where currents meet, and where they will find food and refuge, usually in giant beds of Sargasso weeds. They will continue to grow and migrate from place to place in the Indian Ocean, feeding on small floating organisms. 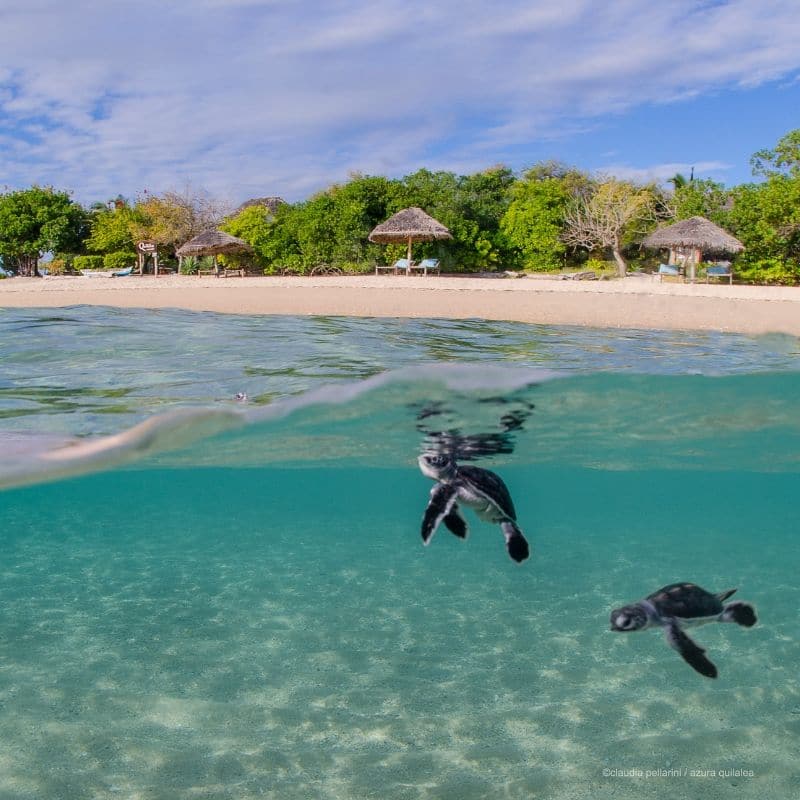 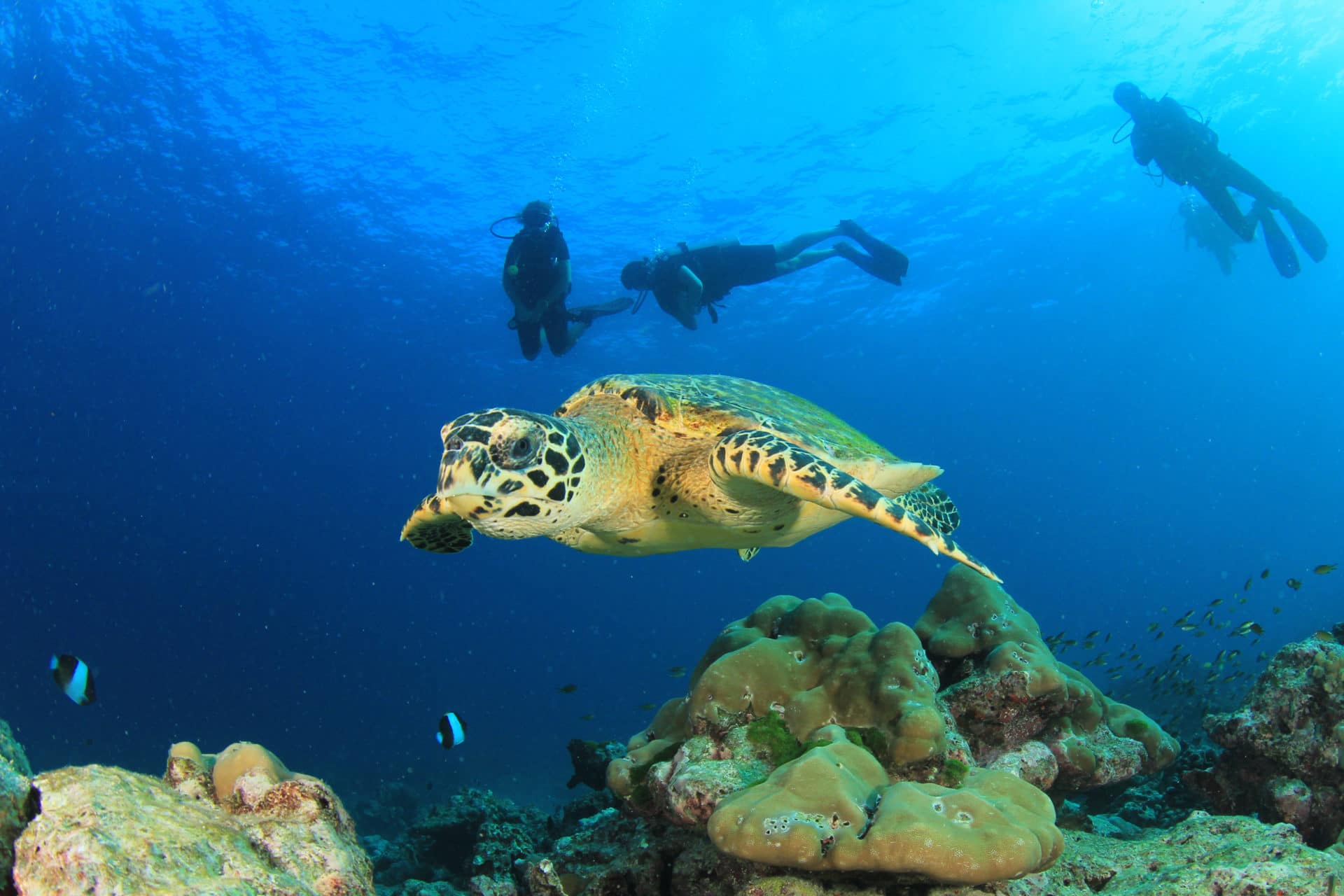 They grow slowly and depending on the species, take between 15 and 50 years to reach reproductive maturity. Born a mere 5 cm (2 in) in length, these magnificent creatures can grow up to 1.5 m (5 ft) in length and can weigh over 300 kg (700 lb). A female will not nest in consecutive years, and will typically skip one or two years before returning to her natal beach.This is the treacherous future the newly hatched and defenceless turtles face, and what with their considerable efforts at survival, I cannot think of a more deserving team to support. Talk to an Ikewana representative about getting involved and travelling to Mozambique in an intimate group of like-minded enthusiasts to help with marine conservation efforts or just to visit this beautiful country.

Get in touch with Ikewana today to include this breathtaking experience in your next holiday: